There are some other open source transmitter projects, so why did I start another one?
At first, I started it in 2009 – there wasn’t too much free options avaliable, ready made transmitters were also very expensive. And last, there weren’t enough flexible for me :-). Even right now I don’t know if similar transmitter exists, at least at affordable price, not thousands of $$ 🙂 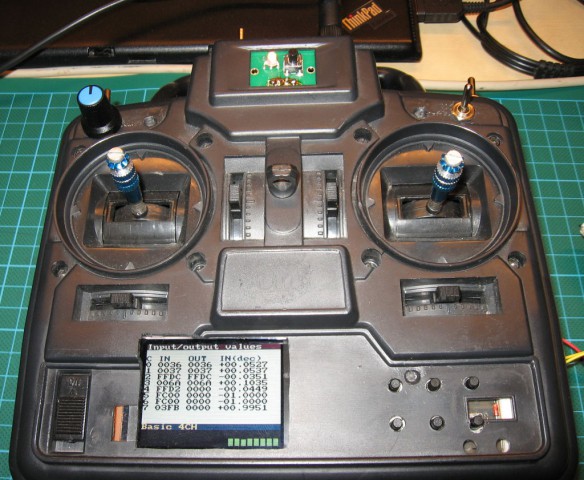 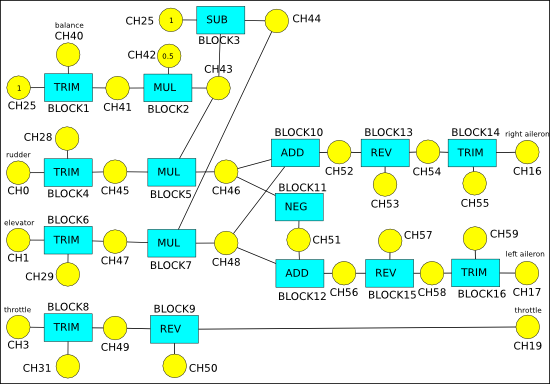 Enough about blocks:-) Let’t go to other topics.

There are few types of tasks inside transmitter:

I use hardware PWM generator to make an accurate PPM signal. In best possible way 🙂
That’s possible because of using timer in CTC mode and interrupts with right, but not so critical place in time. The point is that writing new value to timer in this mode during generating waveform is effective only for new cycle and doesn’t affect current operation, so it could be calculated and programmed anytime during this period. I calculate it just after end of synchro pulse (in interrupt triggered by this event), so CPU has at least 10000 clocks to do it, and this is more than enough. Because of that, there is absolutely no jitter and pulses are just perfect. 🙂

Getting values, calculating it and other things

That’s another cool solution here: multitasking in AVR!
After copying output values to buffer for generating PPM, CPU starts getting analog values from ADCs (using interrupts). They are filtered and recalculated and results are put in input channels. Meantime 2 thing are running: PPM generation using interrups and user interface or other not critical things. When all values from inputs are ready, a task switch occurs. User interface thread is interrupted, state is saved to ram and block calculation task begins. After processing and calculating all blocks, this task ends and switches back to user interface task.

This way PPM is generated perfectly, calculating blocks is done in high priority thread, and the rest fo time could be used to draw some fancy things on color LCD 🙂
Great advantage of multitasking is that during programming user interface I could do whatever I want without bothering myself about timing as long as interrupts are enabled.

I decided to use internal flash memory as main storage for model definitions (blocks, initial channel values etc.). I organized data into containers with headers containing information about model number, contents of container (block, channel, comment…) and length. And one important rule: there could be many containers with the same ‘id’ but only last in memory is valid. It makes updates as simple as writing new version of container at the end of other containers. It also help to reduce flash write/erase cycles. Only drawback is that memody should be compacted from time to time.
But using trims could fill all flash memory very fast, so I decided to make temporary storage only for channels (4 bytes/ch) in eeprom. In future there will be possibility to move values from eeprom back to flash. It will be needed to backup/restore model definitions.

A little bit of history

In 2006, when I started to think about R/C models, I bought cheapest 4 channel transmitter with idea, that if I’ll need more – I’ll make it:-)
Somewhere between 2007 and 2008, during discussion on Alexrc forum, idea of very flexible and fully programmable transmitter were born.
Idea was to define model inside transmitter using basic blocks (sum, multiply etc) and connections between inputs, blocks and outputs.
In 2008 I made a universal board for my projects using Atmega8L and LCD screen from Siemens S65 phone.
In 2009 I replaced Atmega8L with Atmega88 – it allowed to safely (within cpu specs) increase cpu clock up to 11MHz while still running at 3V. And then real story begins:-)
At the end of 2009 I had some things finished: generating ppm, calculating blocks and basics of user interface (menu, keyboard). And then project stuck for almost 3 years.
I tried to make it too universal, and it didn’t worked for UI. During these years I used simple transmitters – there were enough for my planes. But at the end Tricopter appeared:-) Problems with arming control board and need for more channels resurrected old project.
So, at the end od 2012 i removed some code (mostly UI related), revised some assumption (store model definitions not only in flash, but also use eeprom for this), and project moved forward.
I put this board into empty old transmitter bought at about $2, added FrSky DHT module, connected all together and right now it could be used in real world:-)